History of the Friends of the Dymock Poets 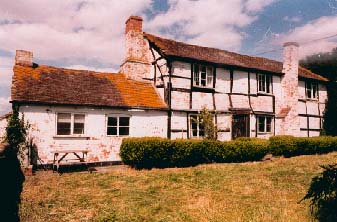 In the summer of 1993, people living in the Dymock/Ledbury area learned that the cottage Frost had lived in at Leddington - Little Iddens, pictured right - was going to be auctioned on October 6. A few people who were interested in Dymock’s literary connections met to discuss the possibility of buying the cottage and turning it into a museum, visitor centre, educational resource. A further meeting for the public was arranged in September, and about 40 people turned up to discuss the matter. It was recognised that raising funds for an auction would be difficult, and that a great deal of money would be required to repair the building. So it was decided that if we could raise the funds, fine - but if not, then an alternative was to form a society to commemorate the poets and their friendships and to protect the countryside that they loved. It was agreed to form the society immediately after the auction, at the Feathers Hotel in Ledbury. Why? Because by an extraordinary coincidence, this was the exact date on which Edward Thomas and Robert Frost met for the first time, at a restaurant on St Martin’s Lane in London, in 1913 ­ exactly 80 years before the auction. As a result, the FDP tries to have some sort of event at the beginning of October every year.

Since its formation the FDP has arranged or sponsored numerous events where there have been lectures about the poets, as well as performances such as Gabriel Woolf’s portraits of Robert Frost and Rupert Brooke. One of our most memorable events was a re-creation of the ‘cider supper’ enjoyed by four of the poets and their wives, which is described by Eleanor Farjeon in her book about Edward Thomas. We also had a splendid fifth anniversary dinner party in Ledbury in 1998. With the help of the Ledbury Amateur Dramatic Society we have produced plays by Abercrombie and Brooke. We have had numerous guided walks on May Hill, the Malvern Hills, on the waymarked walks called Poets Path I and II, and in the Leadon Valley. Six new roads on a housing estate on the edge of Ledbury were recently named after the Dymock Poets ­ an indication of how much the society has raised the profile of the Dymock Poets in just a few years.

The FDP has developed links with the University of Gloucestershire, and are grateful to them for setting up a Dymock Poets Archive & Study Centre which has an excellent collection of books and other material. The college published some of the lectures that were given at FDP conferences, as part of a series of six Occasional Papers on the Dymock Poets plus one on Eleanor Farjeon. The FDP has sponsored events at the Ledbury Poetry Festival and the Autumn in Malvern Festival, and has links with other literary societies.

The FDP publishes a lively newsletter ­ packed full of information about a wide range of literary events, with book reviews relating to the Dymock Poets and the general period (as well as books by our members), and various items about the poets or of general literary interest. Each year the FDP holds an AGM, usually in the autumn and linked to one of our events. FDP members live throughout Britain, although about half of them live in Gloucestershire, Herefordshire or Worcestershire. About a dozen members live in America. Many of the poets’ living relations are members of the FDP including Frost’s granddaughter and Abercrombie’s grandson.

For more details of our history, see Linda Hart’s article on the founding of the Friends of the Dymock Poets .

Return to top of page